I gave this talk at Twitter Math Camp 2017 in Atlanta.

Outline of this talk:

How it’s used in physics: Sample video. When we introduce the students to constant velocity motion, we use the buggies to get them thinking about motion in terms of position and time. We’ll create graphs, data tables, and compute velocities. In my class, I like to set two teams head-to-head to predict a collision location. I provide the starting points on a number line. Pro-tip: Lay down pennies to mark the location at one second intervals.

How it can be used in math: I love to have students plot the Tumble Buggy motion using Desmos — I doubt your physics teacher is using Desmos. Warning! It’s gonna be too easy to step on your physics teacher’s toes with these — if they have the buggies, they use them for the same stuff you would, too. Pro-tip: get a metronome app for your phone so that you can easily mark equal time intervals for observing motion.

Knots on a Rope 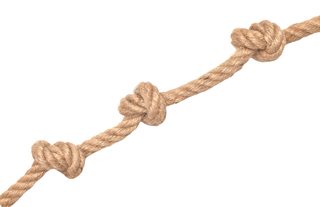 What this is: a piece of rope at least 3 meters long.

How to use it in math: Please take this idea wholesale. It fits great in math class.

What this is: a sonic rangefinder that works by sending out high-pitched sound to locate the distance to an object. Sampling rates are pretty high, maybe 30 Hz, so you can track moving objects. Combined with software, the motion detector can produce graphs of position vs. time, velocity vs. time, and acceleration vs. time.

How it’s used in physics: Early in a course, students generally study how position, velocity, and acceleration are related. Students will sometimes perform graph matching labs where they’re given a graph and must move their own bodies in front of a motion detector to generate a matching graph. Sometimes, the motion detectors will come out again with carts that can roll down inclined planes and again with freely falling objects that fall down toward the detector.

How it could be used in math: The motion detector pairs nicely with Graphing Stories.

What it is: a track with grooves for carts to roll in (carts optional).

How it’s used in physics: all sorts of motion labs. This is quintessential physics equipment that nearly all labs will have in the closet. In a pinch, I’ve used wood molding purchased inexpensively at a home improvement store.

How you could use it in math: Get a marble or ball bearing. Release it from somewhere on the ramp and measure where it comes to rest. Repeat with a new starting point. Repeat.

How it’s used in physics class: Be careful! Drop a ball so that it falls directly over the motion detector. We’ll put that data on a velocity vs. time graph. The slope of that graph acceleration (Δv/Δt). We’ll calculate the acceleration due to gravity. Some teachers might then switch to objects with significant air resistance but that’s rare.

How you could use it in math: Do the same experiment — drop a ball toward the detector. This time, though, look at the position vs. time graph. The object is accelerating. You’re gonna get a nice quadratic plot.

What it is: software that pulls position and time data from videos. Tracker is free. Logger Pro is a Vernier product that costs money but your school may already have a license.

How it’s used in physics: Can do anything a motion detector can but without buying dedicated hardware. I like to have students film throwing a projectile.

How you could use it in math: Especially if your physics teacher isn’t using video analysis, this is a fun tool for generating position vs time graphs.

Shout out to Rachael Gorsuch for showing her math students exploring the focus of a parabola using a parabolic mirror.

Inspired by a session at #T3IC last year, we used lasers to find "mystery points" (foci) of parabolas based on their lines of reflection. The conversations turned to satellites, flashlights, and solar cookers. #MTBoS @ColumbusAcademy pic.twitter.com/YRWvExsdK7

What it is: a string/rope with a weight at the end. Grab a chemistry ring stand, some string, and a mass from the physics lab.

How it’s used in physics: most notably, pendulums come out when we’re heading into learning about waves. We want students to understand the idea of a period (of time) for an oscillation. Fun fact: students never really believe that the mass on the end of a simple pendulum has no effect on the period. The period of a pendulum’s swing is a radical function that depends on the length of the string only.

How you could use it in math: Set up a pendulum and collect data on length of string and period. Plot it. Bam! Now, I love a good function transformation, so this might be fun to play with a function stretch.

What it is: a protractor and a plum bob, often designed to attach to a track, to measure the angle of tilt. Can easily be made with a straw and protractor. I also have used a phone app (iHypsoLite is one of several).

How it’s used in physics: to measure the angle of a track.

What it is: a set of masses that can be hung over the edge of a table, marked off with angle measurements. These strings make visible force vectors.

How we use it in physics: In the study of two dimensional force-balancing, we haul these tables out and set up equilibrium scenarios. Lots of possibilities here but my favorite is “what force will bring this system into equilibrium?”

How you could use it in math: OMG, vector addition! Dudes, just use this the same way we do in physics. Have a chat with your physics teacher that you’re not stepping on their toes by borrowing the equipment, though.

Physics Resources We’ll Let You Use

We like to share as much as the #MTBoS does, so I asked the physics teachers if I could share these with you. They said yes:

The physics teachers on Twitter may not be as large as the math teacher group, but we make up for it in enthusiasm. Seriously, here are some of the most helpful folks I know, regardless of content area. If you’re looking for a hands-on activity to do in math class but don’t know what lab equipment might already exist on campus, hit one of us up.

Generally, physics teachers on Twitter are left of center on their pedagogies:

Meanwhile, the majority physics teachers probably teach the way you learned physics. A few notes about these folks, so that you can make friends and borrow equipment:

Good luck raiding the physics supply closet! And if you find some equipment you can’t identify, Tweet it out to me and #iteachphysics — someone will be able to tell us what it’s for.

I live and work at a New England boarding school; teach physics, robotics, engineering; sponsor a GSA; and coach a robotics team.

This work is licensed under a Creative Commons Attribution-NonCommercial-ShareAlike 4.0 International License.