A) I haven’t blogged in over three weeks. B) I miss the blog-reading-and-writing cycle. C) My Masters program at Georgia State got in the way. Because of A, B, and C, I decided to share this story.

The Kids are Talking About You. Are You?

[The following story is something I thought long about before posting. I share it because it was so meaningful to me.] 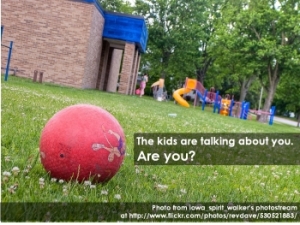 A very powerful experience happened recently between a middle school student and me.

While supervising another teacher’s PE class, one student asked to speak with me privately about something other students were saying. He wanted to know if it was true or not because he likes me as a teacher. I knew just where this was going. And a lump was forming at the back of my throat.

This is always the moment that makes me profoundly nervous but not for the reason some might think. I’ve always been out at work. Being out to the administration and (as appropriate) to students was a condition I put on taking the job. With the support of my administration, I’ve even been lucky enough to work directly with several gay high school students in the past few years.

But it rarely comes up with the younger students at my school. And when it does, I fear backlash from parents, fear saying the wrong thing, fear being a bad role model.

So I swallowed the lump in my throat and confirmed that I am, in fact, a lesbian. He said that he “didn’t think I would do that,” at which point he fell all over his words and apologized for saying the wrong thing. I was saddened by his words — and that he felt the need to take them back.

I went into teaching for so many reasons, but providing a positive role model of the GLBT communities to students was a huge motivator. All that is wonderful about my being gay was knocked down a rung when this kid said he didn’t think I “would do that”.

That. My identity is reduced to “that” in this kid’s eyes. Clearly he thinks being a L-E-Z-B-O is gross. As if I just plucked some ABC gum off a desk and started chewing it — “ewww, I can’t believe you did that.”

When the student said he was surprised, I took the chance to tell him that gay people don’t look or act a certain way. That you can’t tell by looking at someone. The conversation wound down and he walked off.

I couldn’t help but feel, though, that if only I were better at this I could have said something more meaningful to this kid. Words don’t come easily to me (if only you knew how many edits this short blog took me!) nor do most interpersonal skills.

My doubts aside, I’m pretty proud of the conversation. I know I’m making a difference. And that’s pretty cool.

I’m taking a history of education course (EPSF 7120) and will be presenting a related topic: GLBT Issues in Schools. It’s nerve-wracking to get up in front of this group and talk about gay folk in the schools — mostly because I’ll be coming out to them — but my conversation above, motivates me to share. Wish me luck!

7 thoughts on “The Kids are Talking About You”

What do skiing in Tahoe, exploring the Cal Academy of Arts and Sciences, and eating conveyor belt sushi have in common? They're all solid entries for my favorite part of a quick trip out west to visit Rachel.
Ooh I like what portrait mode does to selfies
This new tie by @jacobtobia is the best. Off to mark a belated Bi Visibility Day with the GSA kids!
MFW I just wished someone a nice weekend... on Monday morning. #omgrobots
A few of my favorite creations from the middle school students @experimentory summer camp.
OMG! Here's the Falcon Heavy launch at 2:30am from Melbourne, Florida. Left photo is liftoff and right is the successful landing of the two side boosters. It's my first Falcon launch and it was bigger and louder than the Shuttle, my point of comparison. We're 25 miles from the launch pad. @spacex #falconheavy #spacecoast
I spent the last 4 days with these amazing teachers, practicing experiential education strategies in biology, chemistry, and maker space classrooms @iseen_exed.
Buster doesn't understand selfies. Good boy. 13/10